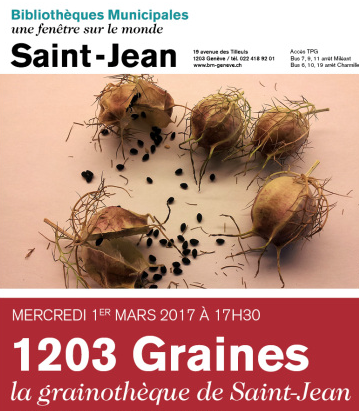 Wednesday 1 March sees the inauguration of a “Grainotèque” a seed library in the Saint-Jean area of Geneva which will be know as 1203 Graines. The initiative is supported by the ville de Genève, ProSpeciaRara, the community gardens of Délices les jardins des délices, the residents association of La Concorde among other local associations and gardeners.

This seed library is in fact a seed swapping environment where anyone can swap, take or drop off seeds for the use of others. It allows everyone to try new varieties of plants in their own gardens while encouraging users to return with collected, dried seeds the following season. This library will be run through the public library of Saint Jean. An advice desk will be manned  by local gardeners every Wednesday afternoon, 16:00-18:00, for the first few weeks.

An official inauguration will take place from 17:00 at the library in the presence of representatives of the Ville de Genève and ProSpeciaRara followed by an apéritif. If you are local to the area why not stop by and be one of the first to benefit from this new initiative.